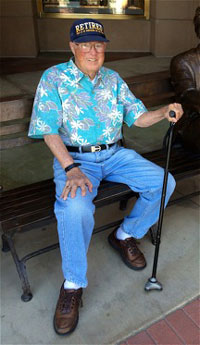 Born on Jan. 3, 1921 to Gilbert A. Miller and Pauline Scott Miller, Allen was raised in the Hollywood Hills of Southern California and graduated from Hollywood High School. From his youth, Allen was an avid hiker who spent many happy hours exploring the hills near his home. While growing up, he also made frequent trips to Idyllwild, camping with his parents at Keen Camp.

Allen pursued a career in the aerospace industry and lived half of his adult life in Yorba Linda, California. His passion for hiking and spending time in the high Sierras led him to a decades-long association with the Sierra Club, where he spent many years as a mule-pack trail leader. His wife of 56 years, Lenore Miller, accompanied him by “taking the rear” on these trips.

They also traveled extensively throughout the U.S., Europe, Mexico, New Zealand, Canada, and the Caribbean. “Big Al” loved to cruise, and together with his wife, he traveled by ship more than 30 times.

The Millers have lived in Idyllwild full-time since 1997. Allen hiked the trails frequently into his mid-80s when doctors advised him to stop. Although he couldn’t hike anymore, Allen relished the opportunity to continue living in his beloved mountains and was a well-known figure in town.

He enjoyed talking with folks at the post office and in his favorite restaurants. He dined so frequently at Cafe Aroma, the chefs knew his favorite “Al’s Omelet” by heart: three eggs, cheddar cheese, tomatoes, avocado and crispy bacon.

Allen enjoyed attending concerts at the Idyllwild Arts Academy and meetings of the Garden Club, and donated frequently to just about every philanthropic group in town including Living Free and Animal Rescue Friends, the Master Chorale, Idyllwild Arts and many more. He was also very generous with a variety of charities outside Idyllwild, too numerous to recount. He was particularly drawn to charities that assisted children.

A memorial service will be held at 11 a.m. Saturday, Jan. 3 at the Community Presbyterian Church. Anyone who knew Allen Miller and would like to celebrate his life is welcome to attend the service and reception afterward.

In lieu of flowers, the family requests that donations be made to the charity of your choice.