Receiving water when you take a table at local restaurants or freshly washed daily linens at hotels or inns are among the changes the state expects businesses to make in order to adapt to the current drought conditions.

On Tuesday, March 17, the State Water Resources Control Board recommended that customers at restaurants and inns must request the water instead of the establishments offering it immediately. On Thursday, Gov. Jerry Brown and state legislative leaders announced a $1 billion emergency water-funding plan.

These actions occurred while the California Department of Water Resources announced that the state’s snow pack, the largest source of water during the summer, is expected to be a record low this year.

“There is no greater crisis facing our state now than the lack of water,” Senate President Pro Tempore Kevin de León (D) said. He described the drought as both an environmental crisis and public health crisis because of the thousands of people without water.

When Idyllwild Water District announced a Stage 2 Water Conservation starting Sept. 1, 2013, it notified local restaurants to limit the automatic or immediate service of water. The district plans to redistribute the letter and admonition this week. 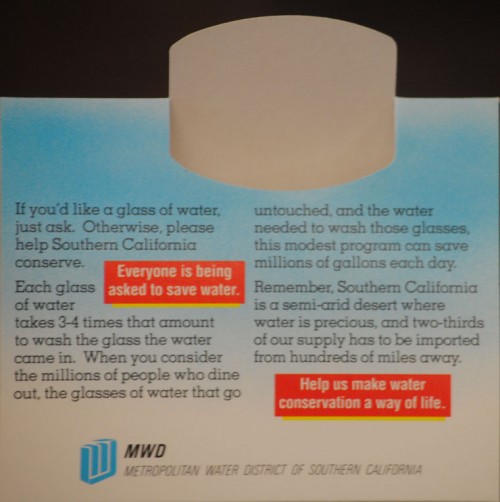 Some of the other prohibitions — such as hosing down sidewalks and driveways or washing vehicles with a hose that does not have a shut-off nozzle — are continuations of the restrictions imposed in July 2014.

Most of the recommended changes will affect the state’s largest water suppliers, but even small districts such as on the Hill will be expected to reduce their consumption to 80 percent of 2013 levels.

IWD has been evaluating a shift to Stage 3 for several months. However, the other two local water districts — Fern Valley and Pine Cove — are only in a Stage 1 water emergency, where compliance is voluntary.

They may have to elevate their water emergency to a Stage 2 to comply with the state edict, even if their water sources are only marginally affected by the drought.

For example, to comply with the SWRCB requirement to limit landscape watering to two days per week and not watering within 48 hours of rain fall, FVWD General Manager Steve Erler told the directors at Friday’s meeting, “We’ll have to go into mandatory water stage and put into our bylaws these requirements.”

At Thursday’s news conference, Brown said, “… this is a struggle. It’s something we’ll have to live with. ‘How long?’ We’re not sure.”

SWRCB-proposed regulations must still be approved by the Office of Administrative Law, so the effective date will be later this spring.

FVWD Board President Robert Krieger, a water engineer for decades, supports the need for people to reduce usage, but he feels SWRCB is focusing too much on Southern California.

“If you examine water use in detail, Southern California is better than the northern state. There are no [water] meters in Sacramento or Fresno. The basic reason for sustainability legislation has to do with California’s Central Valley and the uncontrollable drilling of wells.”

The legislation will accelerate funding that was already approved for water projects when voters passed water bond authorizations, Proposition 1E in 2006 and Proposition 1 in November 2014. Projects for communities without or with grievous water shortages are one of the funding bill’s priorities.

Legislative leaders and the governor both said the dire situation could not wait until a 2015-16 fiscal package is approved in June. The bill will be taken up next week and has bi-partisan support.

“The $1.2 billion proposal today will fast-track water infrastructure already planned for, which I support, but it will only benefit us once we have water to navigate,” Sen. Jeff Stone (R) said in a press release after the news conference. “…Sadly, this proposal does nothing to magically bring water to the tap for our taxpayers now and merely seems to be throwing money at the problem with little thought. The fact is that we must build more water storage, turn the pumps on in the north, and free up available water and send it to our fertile Central Valley farms that feed the nation.”

Also last week, DWR issued a draft strategic plan to implement the Sustainable Groundwater Management Act. The plan can be viewed here: DWR_GSP_DraftStrategicPlanMarch2015 and comments should be sent to [email protected].

“Everyone has to ask the question, ‘How can I conserve more water?’ It really comes down to personal responsibility cutting down our consumption,” Huff advocated. When asked why he hadn’t imposed rationing in the state, Brown replied, “I’m glad only some say that … we’ll have to do more and how we do that across the state is a matter of judgment.

“[The SWRCB] is moving at a certain pace. I’m not going to second guess. But I share your urgency that we step it up in months ahead,” he added. In January 2014, Brown declared the drought and issued an executive order in April requiring state agencies to address it. In July, SWRCB adopted its first emergency regulations.