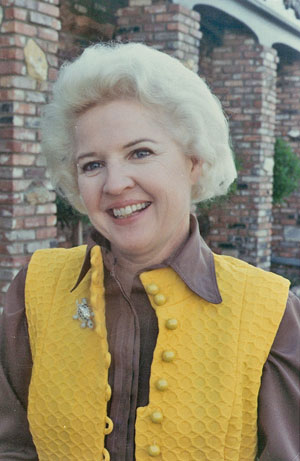 Lasca Jane Wilcox Terhorst, 94, of Idyllwild, passed away peacefully at her home Wednesday, March 11, 2015, with loved ones present. A celebration of her life will be held at 5:30 p.m. Saturday, May 9, in Idyllwild with the Rev. Dr. Betty Jandl officiating at the Idyllwild Spiritual Living Center in the Courtyard Building, 26120 Ridgeview Dr., (951-659-3464).

A second celebration will be held at 1 p.m. Sunday, May 10, in Hemet with the Rev. Dianne Nockey officiating at the Center for Spiritual Living, 40450 Stetson Ave., Hemet,  (951-658-5157). Cremation arrangements have been handled by Miller-Jones Funeral Home in Hemet and Lasca’s ashes will be sprinkled in California, Indiana, Pennsylvania and other sites spiritually significant to her and her family.

Lasca was born in Sayre, Pennsylvania, on May 10, 1920, the oldest of three children to Ralph Wilcox and Beatrice “Betty” Marjorie Ellen Strevy. The Wilcox family moved to Indiana in 1924. Lasca became a Camp Fire Girl leader when she was young and sharing her love of nature was a life-long interest.

Lasca attended high school in Indianapolis, the University of Maryland and later, as a student in Psychology, San Diego State College. Lasca married John H. Terhorst in 1942. A new job brought them from Wisconsin to La Mesa.

Early in marriage, they enjoyed square dancing, ballroom dancing, pheasant hunting and the outdoors. When their children were young, she volunteered with PTA, Cub Scouts and Little League.

She used her sewing skills to help design pink-lady volunteer uniforms and held several titled roles of substantial responsibility in helping create the Women’s Auxiliary for the new Grossmont Hospital. Lasca and John divorced after 30 years of marriage.

Later in life, she enjoyed local and international travel, camping and cooking, and was a continuous learner about scientific topics from the origins of the universe, to geology, to maximizing the human potential. When employed, she independently represented several health and safety products, assisted with retail and occasionally modeled clothing.

Spiritually, she became a licensed practitioner, later emeritus, in the Church of Religious Science. She often taught classes and was an invited speaker at various lecterns within that spiritual practice.

Also close to her was Leonard Gast’s granddaughter Janie Lynn Stewart (Janine).  Lasca is preceded in death by her parents, her ex-husband John Terhorst, her life-partner Leonard Gast, her brother Forrest Wilcox, and her sister Betty Ann Wilcox, who died when she was very young.

In lieu of flowers, memorial donations may be given to the Idyllwild Spiritual Living Center and the Center for Spiritual Living in Hemet. The family of Lasca Terhorst wishes to thank the Rev. Leora Nash, who has been Lasca’s spiritual sister, the many friends who have kept Lasca in their hearts and the direct support of angels, known collectively as Team Lasca, who provided extravagant caring for Lasca during the last year of Lasca’s life.  This quotation posted in her kitchen was Lasca’s life-affirming invitation to us all: “Don’t cry because it’s over. Smile because it happened.”