On this Thanksgiving, former Marine and American Legion Post 800 Commander Danny Richardson will remember a Thanksgiving many years ago in Orrick, Missouri.

Richardson, then a fresh-faced Marine, and his high school cheerleader sister answered a frantic knock at the door several days before Thanksgiving. There, in the cold, stood his sister-in-law with her two infant daughters, snuggly wrapped in snow suits. One was 6 weeks old and the other 15 months. Richardson’s brother knew nothing of what his then wife was doing. After first asking for Richardson’s parents who were at work, she left the infants in the arms of Richardson and his sister, explaining she could no longer care for them.

Richardson’s parents took in both the girls and their father when he returned from work. The father and daughters would stay four years with his parents until he met the woman who would choose to become his wife and mother to his children.

Forty years later, Richardson and his sister again held their nieces as they said goodbye to their father as he lay dying.

In speaking at the funeral, Richardson said he was so grateful that he had told his brother he loved him, something that does not come easy for men of that generation in that part of the country.

“It’s Thanksgiving and saying ‘I love you’ to those you love is important,” he said. “I am thankful I told my brother how I felt before he passed.”

Richardson thought it important to share his family story in the hope that it would remind others of how much we have to be thankful for — for friends and family and the love we share with them, throughout our lives together and especially at Thanksgiving. 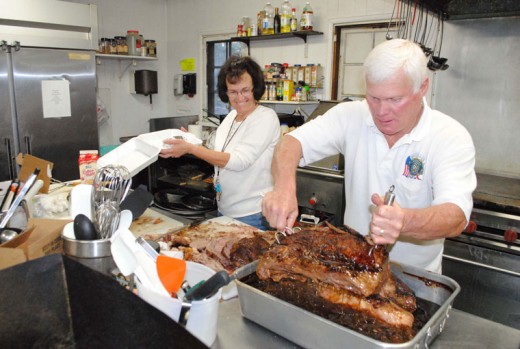