Many customers spoke in opposition to the rate increases at the May 9 public hearing, but the board felt the new rates were necessary and unanimously passed resolutions establishing the higher rates without any discussion after the public hearing closed.

When the hearing began, the first person to speak, Mark Dean, expressed concern about the proposed increases and offered the board information regarding assistance to low-income families. He was aware that the San Jose Water District has a program to help these families.

“I’m probably one of the customers in the community not opposed to the rate increase,” Dean said and urged the board to investigate finding a way to assist some customers.

While several other attendees voiced support for the proposal, this was the exception. The vast majority of speakers were opposed or, at least, skeptical of the need to permanently raise revenue.

Questions ranged from how the district is spending its revenue, to why certain projects were needed and why, when the capital projects are completed, the rates couldn’t be lowered.

After one person acknowledged the need to recoat the water-storage tanks, another member of the audience asked, “Once that’s done, why don’t we go back to the old rates? Why only raise them and let them stay there? It’s not fair.” 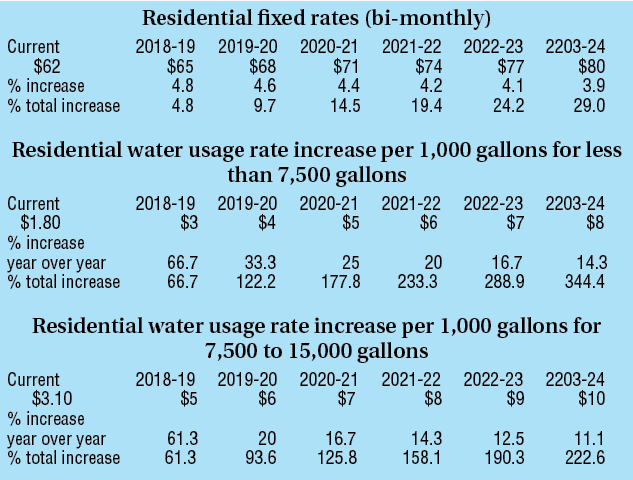 But the basic objection expressed was the rate increase was too steep in a short time. This prompted one person to propose spreading the increase over 10 years rather than five years.

Questioning the need for the increase was a frequent comment. One individual said, “Why all of a sudden a huge rate increase? If you couldn’t see this coming, what good is the board?”

Marge Muir, Pine Cove resident who attends many water board meetings, raised questions about the district’s use of loans to acquire assets such as land on Franklin Drive or a new tractor.

After another person inquired about the purpose of the Franklin Drive property, General Manger Jerry Holldber said he recommended its purchase. Two wells were already on the site and it was a good price for water sources. Further, he believes two more wells could be drilled on the site if the district needed them.

Some of Muir’s comments were not questions but statements about the district’s work, such as installing more fire hydrants and pipe closer to U.S. Forest Service land, and the unfunded liability due to CalPERS.

“I point these out because we don’t know these things,” she said.

As the hearing ending, one person lamented, “We’re all on the same side here. We’re all water users but disturbed and distressed.”

Thom Wallace, resident, observed, “We’ve been getting excellent water for years at a discount. Now we’re being asked to pay what it costs [to produce]. I know it’s not easy.”

After another person opined that it was unfair to the community to hold the meeting on a weekday morning, Marlene Pierce, president of the Pine Cove Property Owners Association, responded that PCPOA has had Holldber come to the last several meetings to discuss the proposal. Few residents attend the Saturday morning PCPOA meetings either, but could, if it were more convenient to learn or to comment on the rate issues, she said.

The U.S. Geological Survey estimates that the per capita daily water use in the U.S. is 80 to 100 gallons or about 2,400 to 3,000 gallons per person each month. While it could be less on the Hill, the statewide California usage is above the national average.