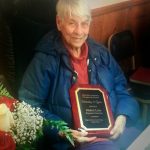 On Aug. 4, 1922, bookkeeper Fred Obenland, his wife Lillie and their son Donald welcomed Mabel May into their Villa Park, Illinois, home.

She graduated from York High School in Elmhurst, Illinois, as valedictorian of the class of 1940, and at Moody Bible Institute in Chicago, she majored in Christian Education Music.

Before she and Martin Lein were married on May 9, 1943, Marty had joined the Navy, and Mabel continued to live with her parents, working as a church secretary and organist.

When Marty returned from England, the couple moved to Southern California because of Mabel’s asthma. Soon after their arrival in 1948, Marty found work at Tahquitz Pines Christian Camp in Idyllwild, which he managed for 44 years.

Mabel helped their children, Lorelette, Larkette and Lonnie, with music lessons and school work, gave organ and piano lessons, held child evangelism classes, and became the organist at the Idyllwild Community Church in 1968.

After Marty died in 2003, Mabel continued as an active musician, attending Bible studies and prayer meetings.

She entered God’s nearer presence on Thursday, July 19, 2018, dearly loved by her church families at the Community and Idyllwild Bible churches.