The Riverside County Board of Supervisors authorized putting the construction of the Idyllwild Library out to bid on Tuesday, Oct. 4. Economic Development Agency Project Manager Natalia Brown discussed the likely timeline once the construction project has opened for bidding:

“Contractors will have three weeks to consider submitting a bid prior to a mandatory 10 a.m. Thursday, Oct. 20 ‘bid walk’ at the new library’s Strawberry Plaza site,” said Brown. “The project architects, HMC Architects of Ontario, Calif., will be present to answer questions. Bidders then have until Thursday, Nov. 3 to submit bids.”

“We’re hoping some local people will bid on the project,” said Brown, noting some Hill contractors have already sought information on the bidding process. Brown said that because the project is federally funded, federal guidelines and required additional forms will be explained to potential bidders;

The county clerk will open all submitted bids promptly at 2 p.m. Thursday Nov. 3. Bids submitted after 2 p.m. will not be considered;

“After reviewing the bids the clerk will announce the apparent low bidder, based on bid amount alone,” Brown continued. “In December, the Board of Supervisors will award the bid.” 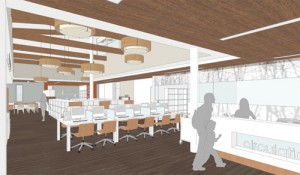 Brown anticipates construction will start in January after the holidays.

Although she could not provide specifics, Brown noted that the county and the owner of Curves have reached agreement on a relocation site so that Curves’ present location would not impact the start of library construction.