“The best case is November, but it could be August or as early as April,” former Crest Line Fire Chief Mike Sherman told the commission. He was referring to the possibility of the district’s bank account reaching zero dollars. 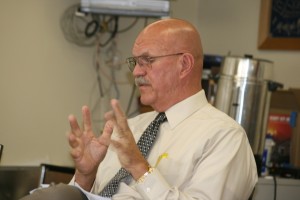 Sherman, who has been talking with staff and investigating IFPD’s financial health, did not take long to deliver the warning to the full commission. He estimated that the current budget problem is between $50,000 and $200,000 off the mark.

“In the public sector, reserves less than 20 percent are bad. The community should take this very seriously. I wouldn't use ‘concern’ or ‘bankrupt’, but it could change very quickly,” he said.

He advised the board to first thoroughly understand the problem and then take time to develop a strategy to protect and revive the department. This should be done with the community’s involvement.

There was no discussion of specific steps yet, but a general strategy began to unfold. The Ad Hoc Renegotiation Committee, composed of Commissioners Jerry Buchanan and Pete Capparelli, will be send a letter to the Idyllwild Career Firefighters Association very soon. They will request that the Association and committee begin to meet and re-negotiate the current Memorandum of Understanding between the Association and the district.

Another Ad Hoc committee will be establish to determine if there are any major safety, ambulance, gear or station issues that need resolving, need money and are not in the current budget.

This and other items such amending the district’s meeting schedule and further discussion with Sherman about the possibility of hiring him as an interim chief will be discussed at the commission’s January regular meeting at 6 p.m, Tuesday, Jan. 10.