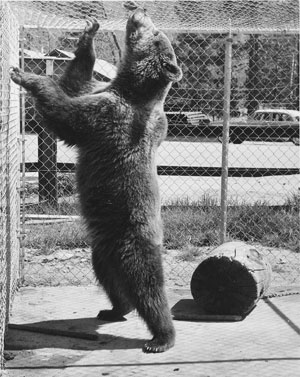 A Russian brown bear in a cage at Snow White Laundy in the 1960s. Laundry owner Bill Neuhoff owned the bear. Clarence Bischof, owner of the Lumber Company, shared the cost of upkeep.
File photo

Although there was snow along the shoreline of Hidden Lake, the lake itself was bone dry. There was speculation that a sharp earthquake during the winter opened a crack and drained off the water.

The county backed the Forest Service in opening the Thomas Mountain area for recreational use. The mountain had been closed to public entry since World War II, except during wet months.

The State Highway Commission adopted a freeway plan for Highway 74 from Cranston to Mountain Center calling for a four-lane, 50 to 60 mph highway.

Hazel Cress, a civic leader in the Idyllwild community, died in Hemet. In addition to pioneering the Idyllwild Fire Protection District in 1946, she served with numerous service groups throughout the years.

Will Geer, “Grandpa” of the TV show “The Waltons,” performed Shakespeare at ISOMATA.

The Pine Cove Fire Department got a new fire truck. The 1979 quick-attack vehicle replaced the old army vehicle that was slow and inefficient.

LeRoy Smoot, Riverside County road commissioner, was adamant that the landmark tree in the middle of South Circle Drive must be cut down even though  proponents of a move to carve the tree into a monument wanted it to remain in its original location.

A group of Hill residents thwarted the attempts of two Hemet teenagers to break into a car parked in the Hemet Federal Savings parking lot.

More than 100 people showed up for the Town Hall meeting on Y2K, sponsored by Mountain Disaster Preparedness and Coordinated Resource Management and Planning.

Idyllwild School cheerleaders performed their way into first place with a dance called “You Know” in the 2004 Jr. Miss Drill Team USA competition in Culver City.

The first Jimmy Campbell Memorial Softball Tournament took place at the Idyllwild field. Town Hall and Idyllwild School organized the tournament to raise money for the Campbell Kids Fund, for the four children of Jimmy Campbell, the late Town Hall director who died March 19 of an unexpected illness.

Tindle Newspapers sold the Town Crier business to a new close corporation Jack and Becky Clark of Idyllwild formed. Mrs. Clark had been publisher-editor of the newspaper from 1996 to 2009 and had worked at the Town Crier since 1984. The office also was moving to 54425 North Circle Drive.