With the new E-publication of “Burro Bill and Me,” a charming and funny memoir by former Idyllwild resident Edna Price, two circles have been linked and one degree of separation has been bridged.

Rick Christian, president of Alive Communications of Colorado Springs, Colorado, graduated from Stanford in 1978 and came to work as a cub reporter for the Idyllwild Town Crier, under then-owner Luther Weare. Christian said he chose this route because of a love for Idyllwild — one nurtured through time spent at a cabin on Fern Valley Road his parents had bought.

While at the Town Crier, Christian discovered “Burro Bill and Me” that Luther had first published in 1973 through his Strawberry Valley Press. Christian relates that when he first met Luther and his wife Marilyn, they had just returned from a trip to France, financed by the proceeds from a film option on “Burro Bill,” a deal struck with budding screenwriter Melissa Mathison, who later wrote “The Black Stallion” in 1979 and “E.T. the Extra-Terrestrial,” in 1982.

He recounted that the option was a big deal in a small town and got him interested in reading the memoir. “It was quite a treasure, a jewel of Western Americana that detailed her unusual love story as a newlywed in Death Valley,” he said. “Edna had died five years before I landed in Idyllwild but Luther remembered her fondly and spoke of her uncommon gentleness as a kind of paramedic before such jobs existed.” Her husband, Bill, was the fire chief for the volunteer company in town. 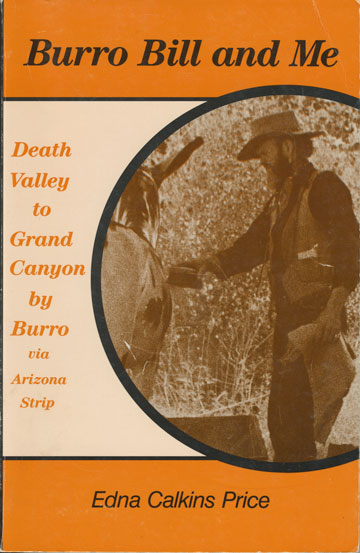 When Christian’s career later took him onward as a literary agent and magazine publisher, he resold the book for the Weares to the Death Valley Natural History Association. “And when that edition had lived its natural lifetime, I breathed life into it yet again in e-book form,” he said. “It’s just launched on Amazon and other e-pub channels in its third iteration.”

On Bondfire’s site, www.bondfirebooks.com/burro-bill-and-me, Christian relates the unusual story that first captivated him and many other readers including current TC Owner and Publisher Becky Clark.

“Raised as a well-to-do Virginia girl, Edna fell head-over-heels in love with a semi-literate and restless young man whose dreams of adventure and freedom were as wide as the California sky,” the book’s description reads. “’I can’t take a soft life,’ he told his bride. ‘It rots a man.’ Thus began an uncommon love story.

“For 10 happy years, 1931 to 1941, Edna and Bill Price abandoned city life and roamed sun-scorched Death Valley and the Arizona badlands on foot with their string of pack burros. They slept under the stars, scratched out a meager living from the wasteland, and hobnobbed with prospectors, outlaws, herders and hobos. ‘In this place,’ Bill explained, ‘a man can find his God.’ Far from feeling displaced, Edna thrived as a desert flower.

“In her extraordinary memoir, Edna writes with wit and grit, recalling ‘those years when we knew no bed but the ground, no roof but the sky, when we were known all over the deserts simply as Burro Bill and Mrs. Bill.”

Christian said he felt a need to continue to give life to this book. “It’s the historic nature of it and recounts careers coming full circle — she ended her career in the place and just before the time I was beginning mine — in Idyllwild,” he noted. “In addition to it being falling-over-funny, I felt ‘Burro Bill and Me’ would be an attractive read to young people who appreciate natural beauty and feel a need to get off the grid.’”