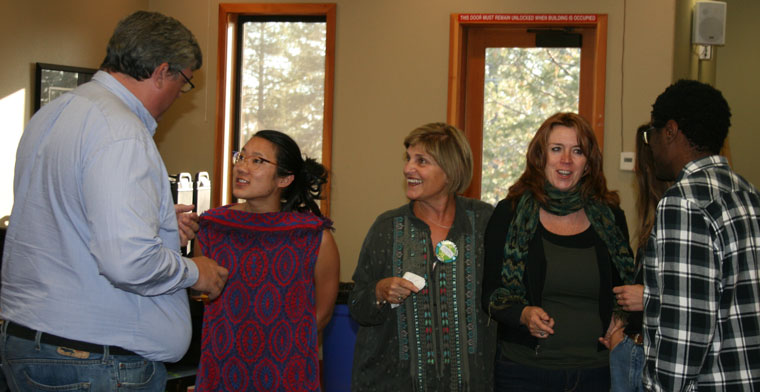 For many years, the Idyllwild Arts Summer Program has been known as a gathering place for some of the country’s finest poets and writers. This year, summer faculty Amy Friedman, Samantha Dunn and Ed Skoog launched the first Writers Week, a cross-discipline conversation among poets, fiction and non-fiction writers, memoirists, essayists and screenwriters.

“For years, this was ‘poetry week,’ said Friedman. “And it was hard to fill classes. Even though Idyllwild is known as an arts town, it has not been known as a writers’ haven. With Writers Week, our vision is to expand this into a cross-discipline, cross-pollinating series of conversations and to grow Writers Week into the best writing conference in the West.”

To do so, co-coordinators Friedman, Dunn and Skoog assembled an extraordinary cast of writing talent including Luis J. Rodriguez, the official Poet Laureate of Los Angeles, appointed by Mayor Eric Garcetti in 2014. Best known for his “Always Running: La Vida Loca, Gang Days in LA,” Rodriguez travels the U.S. speaking in schools, conferences, prisons and libraries telling his story and finding ways to inspire writers among many whom society has abandoned.

Conference attendees experienced a wide sampling of lectures and readings from presenters and five Writers Week student fellows. Friedman noted the success of the concept and the week. “Classes were filled and the excitement was amazing,” she said. “Our goal with this convocation is to expand the understanding of what is art. Next year, we’re going to add to the disciplines represented by bringing in songwriters Alanis Morissette and Jennifer Warnes.”

Rodriguez summed up the feeling of the week. “We make art and art is what makes us,” he said. He spoke on “From Trauma to Transformation: How Poetry Can Heal Persons and Communities.” “I work with the most troubled, whom most people don’t want to be involved with and those who think they have nothing to offer. I find a way in and plant seeds of understanding with people considered peripheral.” And in the process, with street gangs, with prisoners, with Ku Klux Klan kids in West Virginia, Rodriguez finds art. “I have seen so much beauty coming out of street ugliness,” he said. “We start with imagination, and even with the most troubled, there is the potential to re-imagine the world. My job is to plant new seeds and to start others thinking about what can be different.”

Writers Week ran from Monday, July 6 through Friday, July 10. Co-organizers Friedman, Dunn and Skoog are each award-winning writers and dedicated teachers, excited to be promoting the understanding of writing and facilitating the connection between disciplines. For more about Friedman, Dunn and Skoog, visit www.amyfriedman.net, www.samanthadunn.net and www.edskoog.com.