In returning to its straight-ahead jazz roots, Jazz in the Pines year 24 will be remembered as the year innovative and compelling jazz could be heard in all three festival venues.

Even in the French Quarter, innovation found a place and an audience. Santa Monica street busker, singer/songwriter Eric Kufs opened the venue on Sunday, Aug. 13. With a great voice and easy manner, Kufs was funny and politically unafraid. He held the attention of early Sunday festival goers performing original songs in which lyrics mattered. And, to Kufs surprise, his audience paid attention and really listened.

And while on the subject of listening, the word this year for audience attention is “rapt.” Even in the main stage amphitheater, where in the past one sometimes had to strain to hear the music over loud talking, that distraction was nearly absent this year. It was about jazz and listening to jazz.

The main stage featured young turks creatively expanding the jazz lexicon. Frisson from Oberlin Conservatory and Singularity Project from Athens, Greece, pulled the audiences in and involved them in the nuances of their striking musical conversations. Both shimmered with arrangements that did not follow traditional forms and held attention with new musical sounds and tonalities. People listened because the forms, the arrangements, and the sounds were different and new.

Then there were the jazz giants who turned up the heat in Stephens Hall. And here “rapt” was inadequate to describe audience attention and involvement. Audiences were “in” the music with the musicians — the line between the two became blurred by how closely audiences followed each note of improvisation. Stephens became a jazz temple — a place of reverent engagement and soaring spirits.

Harry Pickens, Marshall Hawkins and Roy McCurdy played unimaginably exquisite jazz, highlighted by a bass solo from the “Hawk” on the old standard “I Should Care.” There was silence for a second at the end, tears from many and then cheers that are still ringing in the rafters. There was, in the trio’s musical conversation, a level of consonance and personal connection that was electrifying. That showed with little smiles on the faces of each when a musical moment found a sweet spot that tickled them and grabbed the audience.

And speaking of special moments, main stage headliner and Idyllwild Arts Academy alum, Grammy winning clarinetist Evan Christopher dropped in for “I Got It Bad (and That Ain’t Good),” which added new meaning to “swing.” Bob Boss was all over the guitar with a sparkling “Like Someone In Love.” Yve Evans could not have been more saucy, more coquettish and more personally and musically endearing using the lyrics of the 1934 Ray Noble standard “The Very Thought of You” to tease both Pickens and Hawkins. And the song, which Evans took slowly, flirtingly phrasing each word, brought laughter from the audience and bravos at the end.

Henry “Skipper” Franklin closed Stephens on Sunday giving his fans everything they had hoped to hear.

Young turks also brought their expressive and highly individual style to Stephens with pianist Joshua White’s improvisational voyage through multiple musical genres. Max Haymer, once an ISOMATA student, returned to Idyllwild with his trio and demonstrated why he is making a name in music.

The Seahawk Modern Jazz Orchestra played to a packed Lowman Hall house featuring two female vocalists with very different voices and styles — Chicago native Rose Colella, who ended her up-tempo set with an exquisite straight-tone high note that drove the audience crazy. And of course, Sherry Williams, known for her warm and dulcet voice and consummate musical storytelling, captivated the audience with her poise and loveliness as John Rodby deftly conducted a brilliant jazz orchestra.

And probably as surprising as the main-stage performers all sending up straight-ahead jazz, was the musical genre diversity and polish of all the French Quarter Acts — the Greg Jones R&B band complete with female vocalist and backup singers, the seven-piece Euphoria Brass Band taking patrons back to New Orleans street band days, Andre Thierry Accordian Soul Music for humid Cajun and Zydeco, and the Yve Evans Trio for close and sweet dancing.

The weather complied, there was a breeze, new food vendors offered some different choices and the music excelled in all three venues. And Marshall Hawkins promised that year 25 will be the best yet.

Jazz in the Pines raises money for Idyllwild Arts scholarships. 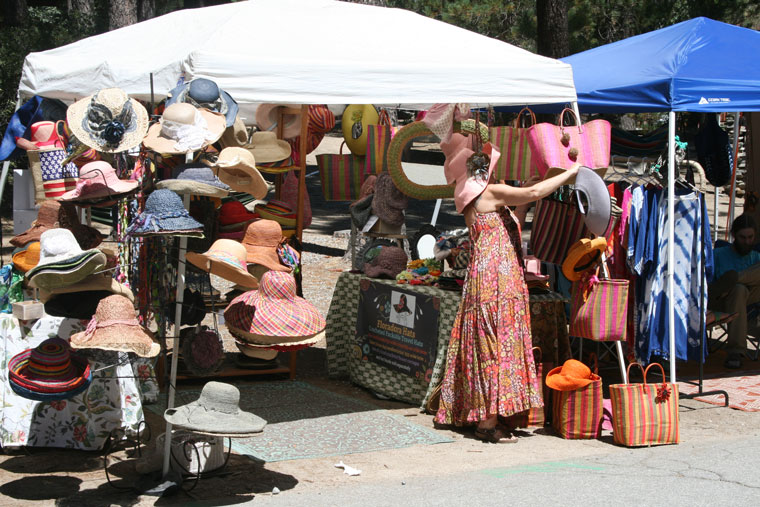