Despite good news about its water supplies and budget resources, the Pine Cove Water District directors ended their Jan. 10 meeting on a sad 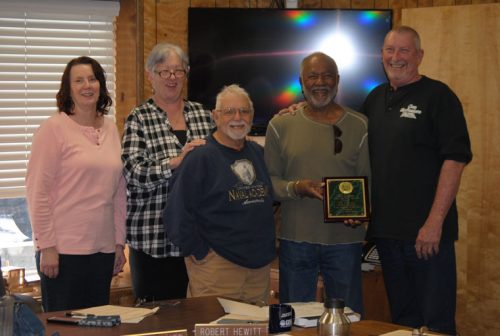 Director Joel Palmer announced his resignation from the board for a health reason. His last day as director is Jan. 31. His colleagues expressed surprise and support and stated how much they will miss his involvement in the district.

This August, Palmer was re-elected to his third four-year term. He was originally appointed to the board in 2007. He was elected to full terms in 2009 and 2013.

For several income sources, such as property taxes and lease payments, the majority of receipts is not received until the second half of the fiscal year. Also, some expenses such as insurance and workers’ compensation are paid in full early in the fiscal year.

“There are no real surprises in income or expenses,” General Manager Jerry Holldber told the board.

Perhaps as early as the February meeting, Holldber plans to present an analysis of the cost to produce water regularly, and during dry and drought conditions. He has been working with the district’s engineer John Egan for several months on the analyses.

“It is my goal and intent to provide an authentic and factual analysis on all rates and charges by utilizing John Egan,” Holldber emphasized to the board. “I believe by taking a methodical approach, and delivering a clear and true representation of our costs, that the constituents will better understand and support the proposed changes.”

The study’s purpose is not justification for higher rates. The review of costs and revenue will evaluate water usage charges, meter charges and the costs of doing business, according to Holldber. Egan will evaluate costs for several years and tour the district. Holldber plans to make the presentation of the results to the board later this winter or perhaps in early spring.

The shade cover for the fuel tanks shared by PCWD and Riverside County Fire Station 23 has been completed. The county has agreed to reimburse the water district for these costs, he noted.

As Holldber announced in September, the district was the victim of a significant water theft this year. Nearly 2.3-million gallons were diverted to water a marijuana grove in the San Bernardino National Forest. A suspect has been arrested and faces charges for the water theft, which has cost the district more than $60,000.

“The district’s production is in the ball park of the previous year. And considering how dry it was and the number of people up here, I expected it to be higher,” Holldber shared with the board.

He added that the groundwater level of the district’s static well rose 1 foot during December, a good indicator that subsurface water is still moving down the mountain and into wells.

Palmer did ask whether the district needed another storage tank and Holldber replied, “No. We exceed the required storage demand for use, peak and fire flow.”

Nevertheless, Holldber did advise the board that he is monitoring the wells and weather closely.

“I just want to be clear that our wells are fine. But because of the lack of moisture and the weather forecasts for the next three months, it would be prudent management and honest with customers to say that in the next two to three months we may go to [Water Emergency] Stage 2,” he stated.

“We’ll have no problem meeting demand this year and probably next year,” he added. “I just want the board to know.”

Pine Cove customer Marge Muir agreed and added that while there has been rain in the past few years, the snow pack has been much less than normal.