Once again, the Pine Cove Property Owners Association has bestowed its largesse throughout the Hill community. At its July 7 meeting, PCPOA President Marlene Pierce, with the help of her board, distributed 12 checks, totaling almost $7,000, to local groups and individuals. The last year that PCPOA selected a dozen recipients was 2015.

The largest award was $1,500 to the Idyllwild Help Center. This gift will go for Christmas holiday purchases and augment the center’s propane funds. The Help Center is a regular beneficiary of the Pine Cove generosity.

The Mountain Disaster Preparedness group was given $1,000 toward the supplies needed for its new Disaster Assistance Station in Fern Valley.

The Idyllwild Snow Group received its first PCPOA donation in 2017 and this year was granted a second, even larger, for producing brochures.

Six groups received $500 gifts. Of course, the Pine Cove Fire Station 23 was one of the beneficiaries. This year, the funds will contribute to the well being of the station’s staff, while on duty.

The Idyllwild Area Historical Society and Idyllwild School Scholarship Fund, who have been frequent recipients, were among the 2018 beneficiaries.

The Idyllwild Soroptimists will use its $500 for the Women’s Cabinet this year.

The gifts to the Help Center and the Scholarship Fund are also intended to aid needy Pine Cove residents, Pierce added. 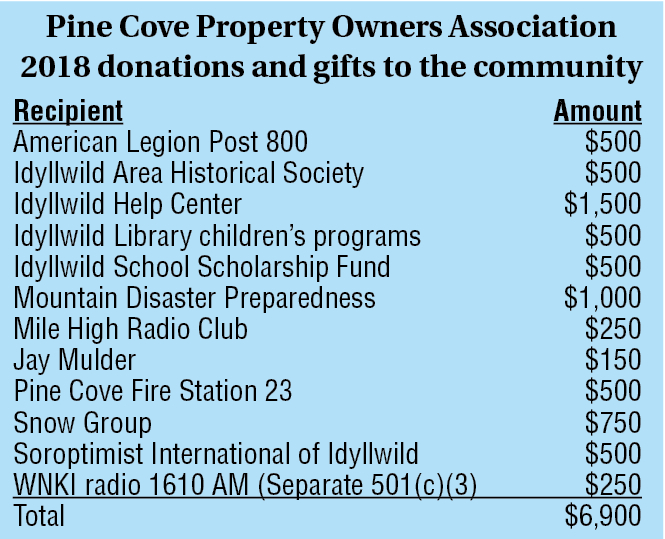