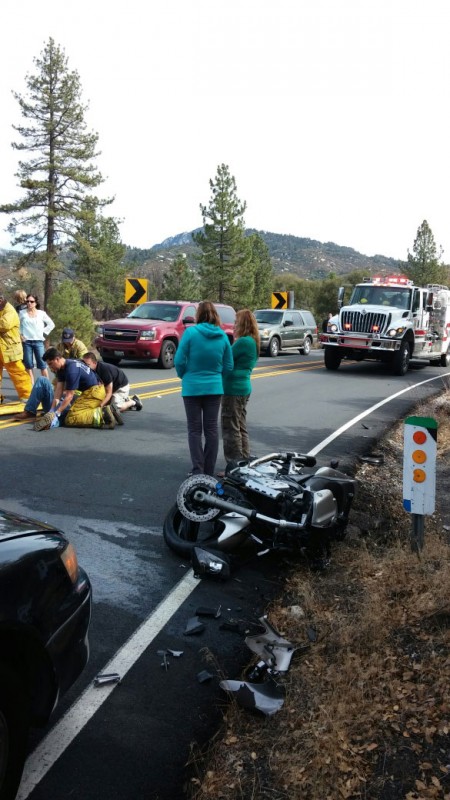 An Idyllwild man suffered injuries in a traffic collision in town on Highway 243 Friday night.

Brandon Brown, 30, of Idyllwild, was driving a silver Ford F150 south on Highway 243 just north of the Riverside County Playground Road at about 9:40 p.m. when his truck collided with another vehicle, according to California Highway Patrol Public Information Officer Darren Meyer.

Stephanie Giddings, 45, of Pine Cove, was pulling out west onto Highway 243 in a white Dodge Ram, colliding with the F150.

Meyer said the investigation is continuing into the cause.

Brown noted on Facebook this Monday that he was being released that day from the hospital with “a broken leg and a few stitches.”

Anthony DiNardi of La Bella Montagna and Chandra Crump of Goodtime Pub and Grill were first on the scene, said La Bella owner Mariah Tartaglia. “Tony, with the help of Chandra, extracted those kids from the wreck,” said Tartaglia. Three young children were in Brown’s vehicle, she said, and DiNardi suffered minor injuries from broken glass.

At about 11:30 a.m. Sunday, Cirilio Gonzalez, 54, of Perris, crossed the double-yellow lines on his Yamaha silver motorcycle traveling north on Highway 243 just north of Highway 74, crashing into a gray Toyota Tundra driven southbound by Dawn Sonnier, 39, of Idyllwild, said Meyer. Three other passengers were in her vehicle.

Gonzalez suffered minor injuries, he said, but no one was transported to a hospital. Idyllwild Garage towed away the motorcycle but the Tundra, which did sustain damage, was driven away, he added.

This investigation also is continuing but Meyer said alcohol was ruled out.