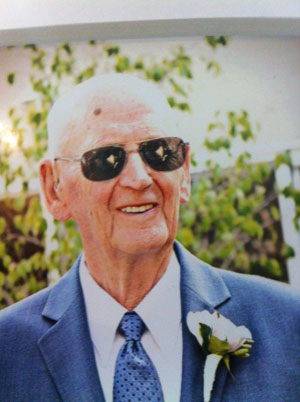 Paul Arnson passed away peacefully with his family by his side at home Friday, Oct. 31, in San Diego.

Paul was born March 10, 1928 in a one-room log cabin on a 160-acre farm that was homesteaded by his grandparents in Northeastern Wisconsin. He spent the early years of his life living without electricity and walking 4 miles each way to the only schoolhouse in the area located outside of Washburn, Wisconsin.

Upon graduating from high school, Paul spent two years driving heavy equipment for the United States Air Force, then returned back to the farm to continue that trade for the Bayfield County Road Department.

Shortly thereafter, he married Muriel Virginia Olson and re-located to Northern Minnesota to take advantage of the massive taconite mining boom that was sweeping across the Iron Range of the Midwest. He became an electrician with Erie Mining Company, working on the electrical motors that powered up the largest heavy equipment in the world at that time.

He settled in the town of Hoyt Lakes, Minnesota, and it was there he spent the next 30 years of his life honing his skills as a husband, a father and a true outdoorsman.

Whether it was a day off in between shifts, or a two-week vacation, Paul had his family by his side on an outdoor adventure. He led many canoe trips into the untamed lands of Northern Ontario, Canada, catching 25-pound lake trout, and eventually made his way into the Eastern Sierras catching 10-inch golden trout — the emphasis always being on the experience and not the size.

He was considered by many to be one of the greatest fly fishermen to ever cast a line, and was always willing to share his expertise and knowledge with anyone who showed interest in what he referred to as a “Gentleman’s Sport.”

The months of fall were his favorite time of year, as it meant the steelhead were running in the Brule River in Wisconsin, which then led to the chasing of the elusive white tail deer of Northern Minnesota.

As the winter months set in, his indoor activities included building custom fly rods, fly tying and, of course, bowling, of which he was the first to roll a perfect game at the North Star Lanes in 1972.

Paul never had a complaint or critique of anyone or anything. He loved his community, his work and most of all, he loved his family.

The world benefited from his existence. He will be missed by many, but those benefits will live on.

He is survived by sons Lee of Idyllwild, and Paul (Melissa) of San Diego; four granddaughters, Riley, Brooke, Kate and Shelby; brother Larry; and sister Kathleen. He was preceded in death by parents Elsie and Oscar, wife Muriel and partner Elaine, sisters Mary Ellen and Audrey, and brother Tom.

In lieu of flowers or cards, the family asks that when you leave your house in the morning to simply enjoy the beauty of  the day. A new experience awaits.