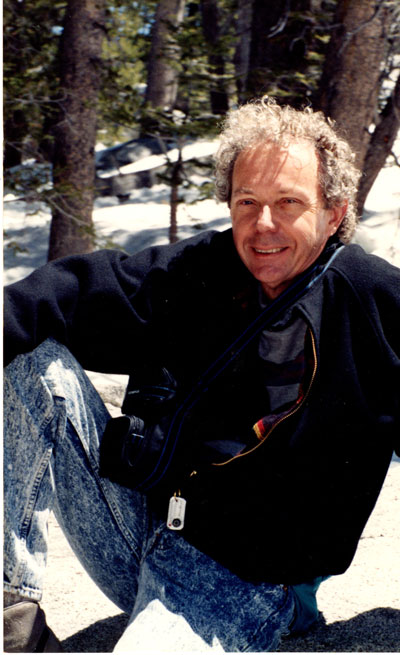 On May 28, 2015, at 1:30 a.m., at age 82, Donald Philip Sherman, long-time resident of Idyllwild and formerly of Sierra Madre, lost his battle with an aggressive form of multiple myeloma cancer. He is survived by his life partner and soul mate Larissa Moss, his son Philip Sherman and his sister Sylvia Sherman. A celebration of his life will take place at the end of this year. Time and place will be announced in a few months.

Donald wished to share his life story in his own words:

“I will miss my beautiful sister Sylvia, my adventurous son Philip, and especially Larissa, my loving partner and soul mate for the past 25 years.

“I was born on April 28, 1933 in San Diego to Philip and Florence [Boronda] Sherman. They were interesting families in their own rights. William Tecumseh Sherman brought his family across the northern plains and pioneered local newspapers all the way to the Southwest.

“The Boronda family dates back as far as about 1750 in Mexico. The Boronda history began in California when Eusebio Boronda joined Father Serra on his second mission-building journey. It ended with the granting of a Spanish Land Grant to the Boronda family, which was quickly revoked by the United States government. However, the Borondas are still being credited with establishing the first boy’s school in California, which is the site of the current Boronda Museum in Salinas, California.

“My little sister Sylvia came along five years later. The first 10 years were not too exciting, except for the weekend camping trips to Idyllwild. I never got to hike up to Tahquitz Peak with the older kids. They said I was too young.

“In the meantime, we moved to San Bernardino. I graduated from San Bernardino High School in 1951 and Valley College two years later. I also was a member of the SB Valley College Symphony and Marching Band during the football season. I went on to San Diego State, where I graduated in 1955 with business and economics majors, but I still had an interest in music. One of my best friends had played in the Sousa band.

“Before I knew it, I was private first class in the U.S. Army. Within a year, I was promoted to lieutenant in the Finance Corps. No complaints, as I was transferred to the Nevada Military District headquarters in Reno, Nevada, and I lived in an apartment across from the University of Nevada.

“After my army discharge, at the Presidio in San Francisco, I returned to a part-time job I had while in college. This time, I became manager at the Carnation Olde Fashioned Ice Cream Parlour at Disneyland. Yes, yes, I met Walt Disney. One of my more pleasurable moments was to show Elizabeth Taylor and her then-husband Eddie Fisher to their tables. There were others I met, such as David Niven, as one of the original 007 agents, and Richard Nixon with his Secret Service entourage. As you may recall, many other exciting events took place such as Dance Night at Disneyland. These groups included young performers who became the stars of the ’60s and ’70s. During this time period, another exciting moment was when Richard Chamberlain flew into Hughes Market shouting, ‘I got the leading part of Dr. Kildare,’ television’s hottest-running TV series between 1961 and 1966.

“But show biz didn’t seem to hold my future, so I returned to the world of higher learning.

“A few years later, I had earned a teaching credential at California State University, Los Angeles. This began a teaching career for 30 years at Luther Burbank Junior High School. I had a lot of different assignments. I became Leadership and Scholarship Society advisor and chairman of the History Department. I copied a few ideas from other schools and created Awards Night with local celebrities and government officials as guest speakers. Part of Leadership Class was to sponsor live dances in the gym. The ’50s Dances were the favorite, especially with all kids dressing in costumes. I was also the graduation coordinator.

“I managed to find time to marry and become a father to my adventurous and overcurious son Philip. One might say that it began as a really big show that has changed my life forever. Philip picked up on my clarinet and bassoon talents. He has many more talents in addition to teaching English to people in a heavy-machine factory in Osaka, Japan.

“My marriage ended after 24 years, but certainly not my life. I was enticed to go into real estate by a fellow teacher who had a part-time career in real estate. Again, I returned to school and added real estate to my list of careers in addition to teaching. This also led to the romance of my life. In fact, it changed my life.

“It seems again, coincidentally, that Larissa Moss needed a Realtor in early 1988 when she was going through a divorce. After I sold her house in Sierra Madre, Larissa disappeared. I was not to see her again until late 1989. She walked into the office as beautiful as I had seen her a couple of years before. Before I knew it, I jumped up from my desk and grabbed Larissa. One of my most memorable quotes to Larissa was, ‘Why was I not born 20 years later?’ (in reference to our age difference). With that, I planted a light kiss on her lips. How was I to know that I had just kissed and held one of the most intelligent, most beautiful women I had ever seen?

“Larissa formed her own corporation and was in demand all over the world as a speaker, author and instructor. Of course, I had to accompany her. During our 25 years together, I got to visit Munich, Ulm, Berlin, Leipzig, Dresden, Hannover, Salzburg, Vienna, London, Stratford-upon-Avon, Rome, Bratislava, Prague, Kiev, Charkov, Amsterdam, Oslo, Istanbul, Sydney, Taipei, Singapore and Kuala Lumpur, to name a few of the more exotic places. We also traveled extensively all over the U.S. and Canada, and along the border of Mexico.

“Domestically, some of our most memorable trips were our RV trips in an old 1980 4-cylinder Datsun. That was an adventure! I remember the towing of our RV from the Sequoia National Park back to Fresno. So much for our ‘Maiden Flight.’ And I will never forget the downpour that drained down my back during a midnight deluge in Tucson, Arizona.

“Between 1995 and 2005, we rebuilt a 900-square-foot cabin in Idyllwild to experience the beauty of winter that all the ice and snow bring. We changed walls for sliding doors, designed a new kitchen complete with Heartland stove, drove to New Mexico to buy knotty pine doors, and added a basement, a covered porch and a sun porch. Most of the remodeling was self-engineered and done by Larissa and me. One of the most exciting events was when, within one minute, the oven and stove, storage cabinets plus a few loose tools on the counter fell on top of me and left me with a big bump on my head. Larissa tried to catch the cabinet, only to have a metal nail pierce her left wrist. At the same time, our dog Teddy discovered a bag of rat poisoning and ate it. Miraculously, we all survived without medical attention.

“As for Sylvia, Philip and my beloved Larissa, you three have brought more love into my life than I could have wished for. And special thanks to Cookie, the most beautiful cat in the world, who always gave me a kiss and sucked my neck as I entered dreamland every night.

“Do not grieve for me. Be happy that after 82 years, I have fought the fight, run the race, tasted the glories of victory and reached the finish line!”

To my precious darling and soul mate,

The only person to whom I could relate

In a totally honest and non-pretentious way

With no need to keep my true self at bay.

It was love at first sight for my sweetheart,

Who was instantly hit by a cupid’s dart.

But it took a little longer for me to see

What a wonderful partner you would be.

I knew you were kind, considerate, and loving.

You were shy, old-fashioned, and very giving.

I had no furniture, so you bought me a couch.

I knew right away that you were no slouch.

I had just been through an ugly divorce,

And it appeared that you were on the same course.

We met as friends who cared for each other,

Who wanted to be of help without any smother.

It took a while to break old traditions,

As well as inhibitions and preconditions.

We even went to psychotherapy,

Which, on your part, took some temerity.

A few weeks into our old-fashioned romance,

You and I both saw a chance

To build a new life for our true souls,

Without having to play artificial roles.

We connected on a level that was so deep,

That we both realized we had been asleep,

As far as true unconditional love was concerned.

Something we instinctively felt we had earned.

We both had similar hardships in our lives,

Whether it was with husbands or wives,

With work or with family, it didn’t matter.

It seemed that both of our hearts were tattered.

One night we connected over 20 cups of tea,

And both of us could no longer see

A life without each other’s love and support

Or with selling our personalities short.

This event began a journey of 25 years,

Which covered all emotions, from exhilaration to tears.

We shared everything, from thought to deed

Knowing we were of the same creed.

With — I must admit — flawless executions.

It was a joy to watch you solve a challenge

With intelligence, tenacity and balance.

Then there were our travels to near and far,

Some romantic, and some downright bizarre.

The drive at night through Ukraine comes to mind

Where the road full of potholes was hard to find.

I remember the last time you proposed to me.

It was at Waipi’o Valley in Hawaii.

We lived in a tree house, 30 feet up a monkey pod tree,

With ferns and waterfalls as far as the eye could see.

Remember the geckos playing a game?

And the limo at LAX, that never came.

It didn’t matter that we were marooned;

We were still glowing from our honeymoon.

There are simply too many precious memories.

The few I recited are just a tease

Our love just kept growing until it spiked.

My life had meaning, only because of you.

I experienced the kind of love I never knew.

Having you in my life was such an incredible gift,

Even my spiritual awareness took a big shift.

You came to this earth with several assignments,

All of which you completed with love and patience.

You were a pillar of strength and a hero to me!

Now you are done with your jobs and your soul is free.

I wish you peace, my sweet prince

Although I’m sure you will convince

All the angels at your flanks

To help you with your pranks.

I know you and your friends are having a blast!

Fly away on your wing.

Until we meet once more.

I Am Yours For All Eternity,