Idyllwild School continued its impressive performances on statewide testing. Last spring was the first time for the new test — California Assessment of Student Performance and Progress — and last week, the State Department of Education released the results.

“We did well when compared to other schools in the Hemet Unified School District,” said Idyllwild School Principal Matt Kraemer. “I’m proud in how well we did relative to other schools.”

This is the first year for the new tests and they are substantially different from their predecessors. State Superintendent of Public Instruction Tom Torlakson said the CAASPP results should not be compared to results from the state’s previous assessments — the Standardized Testing and Reporting program.

At Idyllwild School, nearly 53 percent of the students exceeded or met the standards for English and language arts, while 24 percent nearly met them. Overall Idyllwild School was one of the two best in the Hemet district.

The mathematics results were similar. Statewide, 33 percent of students met or exceeded the math standards and 29 percent nearly met them. Unfortunately, 38 percent of the students throughout the state did not meet the standards.

At the HUSD board meeting Tuesday evening, Sept. 15, Dr. David Horton, assistant superintendent, reported that the Idyllwild third-grade results for English and language arts were second in the district and more fourth- and fifth-grade students were proficient or above than any other elementary school in the district.

“Hemet Unified School District is comparatively ranked alongside the other 22 districts in the county,” said Horton. “Hemet USD moved from rank 14 to 13 in English-language arts and 18 to 12 in mathematics. In fact, the change in ranking in mathematics (six places) is the largest-ranking improvement of any district in Riverside County in this testing cycle.

“We are proud of what we have accomplished thus far, and we are excited to see what the future brings for us. Idyllwild School’s test scores continue to rank within the top three spots compared with elementary and middle schools within HUSD.”

Kraemer credited his staff for working and teaching the students. For example, George Companiott, middle-school teacher, had students using computers to do many of the tasks, such as highlighting and editing text, required during the test.

In mathematics, more Idyllwild School students in grades three through five met or exceeded the standards than in any other HUSD elementary school.

CAASPP includes a number of assessments that evaluate student progress on the California standards in mathematics, English, language arts and literacy, often referred to as the Common Core.

“The results show our starting point as a state, a window into where California students are in meeting tougher academic standards that emphasize critical thinking, problem solving, and analytical writing,” Torlakson said. “… so I am encouraged that many students are at or near achievement standards. However, just as we expected, many students need to make more progress.”

CAASPP tests for English, language arts, literacy and mathematics were given to students in grades three through eight and grade 11. They consist of two parts. First is an adaptive test taken on a computer that gives students different follow-up questions based on their answers, thereby providing a more refined picture of a student’s abilities. Second is a performance task that challenges students to apply their knowledge and skills to real-world problems. The two parts measure depth of understanding, writing, research and problem-solving skills.

“In math, students no longer give an answer. They must explain their answer and the logic,” Kraemer explained.

The baseline scores reflect, in part, the rigor of the state’s new academic standards, Torlakson wrote in a press release. CAASPP focuses on assessing crucial abilities, such as analyzing problems, thinking independently and writing clearly with evidence. Those skills take time and effort to master but are essential to succeed in today’s world.

In contrast, STAR was a multiple-choice, paper-based test in which students, for the most part, filled in bubbles on paper and could more easily guess correct answers. 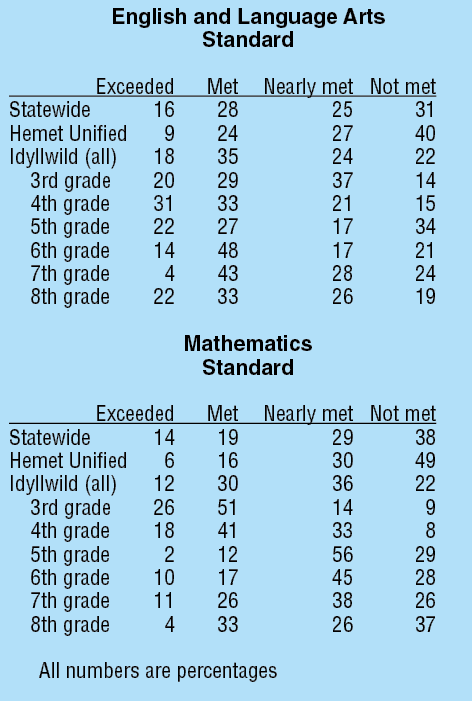