On Nov. 19, the Idyllwild Community Center sponsored my presentation at its Speakers Series at Silver Pines Lodge. The topic was the motion-sensitive cameras I’ve placed around Idyllwild and that I wrote about in a previous installment of “Journal From the James” (April 9, 2015).

The presentation was well attended and I enjoyed letting the audience know what we have been finding with the cameras. At the end of the presentation, I mentioned that we would like to make the information we are finding more accessible to all in Idyllwild who would be interested. I proposed putting together a “coffee table” book highlighting photos of each species captured by the cameras with pertinent natural history information on them. That way it is hoped the people of Idyllwild can not only become more aware of “what’s wild in Idyllwild,” but also learn a little more about wildlife roaming around our town.

As a prelude to this effort, I will periodically provide in this column an example of what the book would present. For the first installment, I have chosen the bobcat. What follows is the type of information we would like to provide and hope it is of interest to readers.  Feedback on what other information might be interesting would be useful in producing a book. That would indeed help us appreciate even more what’s wild in Idyllwild.

Bobcats: alias catamount, lynx cat, wildcat and others. With the scientific name of Lynx rufus, the bobcat is taxonomically related to the Canadian lynx, both representing the only short-tailed wild cats we have in North America. Its species name, rufus, hints at the reddish (rufous) color and, of course, its common name refers to its short, bobbed tail.

Bobcats are found across most of the U.S. and into Canada and Mexico. Even in the areas where they have been previously absent, in recent years, they have been expanding their range. With a range so extensive, it is not surprising that bobcats can be found in a variety of habitats, ranging from denser forests to shrub-dominated deserts to the mountain habitat of Idyllwild.

Like all cats, the bobcat is a strict carnivore, consuming small mammals such as rodents, squirrels and rabbits. Also like most other cats, bobcats stalk their prey so they need shrub cover for hunting.

Female bobcats give birth to two to three young each spring and the kittens stay with her until the late summer/early fall. We were fortunate enough to have one of the cameras capture a female with her kitten as they moved along Strawberry Creek.

Except for a brief courtship with the female, males do not participate in raising the young and spend most of their time defending their territory from other males.

The bobcats of Idyllwild proved to be one of those surprising results from the camera efforts. There was no doubt they occurred in the area but what was surprising was how close into town they live, including the back yards of Fern Valley.

In all, we found bobcat photos from more than 70 percent of the places the cameras were placed. In several of these areas, multiple photos — more than 150 in one site — indicated the ease at which bobcats have adapted to living in Idyllwild.

How can there be so many bobcats in Idyllwild and still not be commonly noted by human residents? The answer can be seen in the timing of when the photos were taken, as seen in the activity graph (shown). Like a lot of predators, bobcats are normally most active in early evenings and mornings.

The drop in activity around midnight indicates they do like to sleep some at night. However, it is the daytime when most carnivores sleep and the bobcat is no exception. Still, even during these daytime hours, indicating the ease at which they feel around humans, bobcats in Idyllwild do occasionally move about and at those times can be seen. As they are never a threat to humans and rarely to our pets, bobcats indeed make great wildlife neighbors and help keep the wild in Idyllwild. 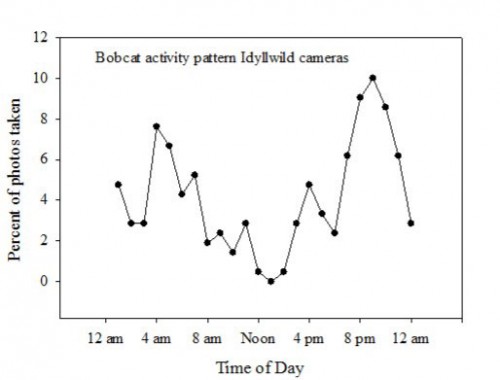