More than $70 million for OT

Seven Riverside County agencies used more than $1 million for overtime expenses in fiscal year 2016-17, which ended June 30. Unsurprisingly, the larger the department’s budget, the greater its overtime expenses tended to be.

The department with the greatest percentage of funds used for overtime was the Registrar of Voters. This agency expended $625,000 on overtime, but this amount was 12.7 percent of its total salaries and benefits budget.

While the District Attorney’s office spent more than $1 million on overtime, this was only 1 percent of its total salaries and benefits expenses.

The Fire Department overtime expenses jumped nearly 25 percent this fiscal year. According to the department’s response, this was attributable to a large and persistent turnover at its emergency Command Center, which has to be staffed.

In contrast, the District Attorney’s office overtime grew from fiscal year 2013 through fiscal year 2016, but in fiscal year 2017, overtime was about two-thirds of the prior year. Much of the overtime costs were for investigations and not attorney work, according to the office.

One reason for the high overtime at the Registrar of Voters was the November 2016 general election, which required weeks of counting votes and certifying results. And three special elections occurred between May and June.

See the accompanying tables for the seven agencies that spent more than $1 million on overtime and the five agencies with the highest percentage of overtime expenses.

The Riverside County Auditor Controller reviewed the use of overtime by the county’s various departments. The analysis of overtime costs and usages was started in 2013, according to the auditor’s report. 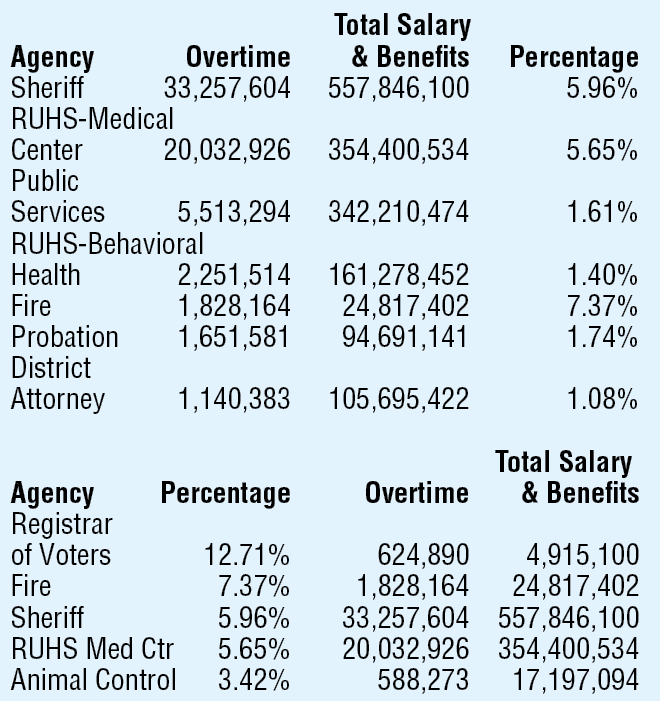