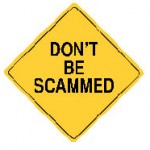 An Idyllwild business owner reported a phone scam that attempts to swindle money from unknowing victims.

The business owner received a phone call Thursday morning from a person claiming to work for Southern California Edison. The caller said that unless the business owner provided a credit card number and authorized payment of a larger-than-your-typical-SCE-bill sum of money, the electricity would be shut off at their business.

Fortunately, the business owner knew better than to comply.

NBC Los Angeles reported last spring that this had become a common problem for SCE customers.

Here's what they reported in March:

"David Song, a spokesman for SCE, said more than 6,000 customers have called to report a similar incident since the beginning of last year. In total, the scammers have taken almost half a million dollars from local customers, mostly from businesses.

"Song reminded customers that SCE representatives will never call and make a verbal demand for payment. In the event of a past due bill, the utility company will send two letters, followed by a pre-recorded phone message. Pre-paid cards are not an acceptable method of payment, and anyone approached to pay this way should contact both the company and local authorities, he said."