Fire continues, and residents bounce back

Wednesday, July 25, the third of four consecutive days of heat warning, started with blue skies, hardly any clouds, but hot. No one had any idea how hot the day and days that followed would get.

Highway 74, west to Hemet, began burning. A huge column of black smoke rose into the sky. It could be seen for miles. Idyllwild Fire Department, the U.S. Forest Service, and local Cal Fire and Riverside County Fire units were alerted and responded.

As the Hemet units began racing toward Idyllwild, they had to stop and smother a small fire burning in the creek bed about a mile east of the Forest Service’s Cranston Station.

Highway 74 was closed to all traffic.

Within minutes of the initial fire unit dispatch, CHP and the Riverside County Sheriff’s Department were responding to reports that an arsonist was driving west on Highway 74 into Hemet. The city’s police department was notified to be on the alert.

Two people saw the car, followed it and relayed the license plate number to law enforcement at about 11:54 a.m.

The fire is spreading. One fire official described it as the worse case. “Wind blowing from west and pushing it up the slope toward town.”

The two people continued to follow the vehicle and observed the suspect start another fire at 12:18 p.m. near Gilman Springs Road.

By 12:23 p.m., Hemet Police stopped the suspect, Brandon N. McGlover, 32, of Temecula, near Newport Road and State Street, south of Hemet and near Diamond Valley Lake, and arrested him.

The fires on the Hill spread toward the Idyllwild Water District Treatment Plant, the back of the Idyllwild Arts campus, which was housing hundreds of summer students, and Inspiration Point, the latter endangering homes and structures on Doubleview Drive.

At 12:30 p.m., fire officials established a command post at the Forest Service’s Keenwild Ranger Station. By 12:37 p.m., Highway 243 from Banning was closed to traffic, too. The fire plumes were towering over the Hill and creating shadows in the desert.

Within four hours, the Cranston Fire, its official name, had grown to 1,200 acres and fire officials could claim no containment. Besides threatening the south edge of Idyllwild, the fire was rapidly approaching Mountain Center.

Evacuations had already begun — individuals, families and the local camps. Already the fire was threatening 600 homes. Then power went off to all who did not have generators.

Riverside County quickly established an emergency evacuation center at Banning High School, which is at the base of the Hill along Highway 243.

Fire officials estimated the fire’s size to be 4,700 acres, with no containment. Some houses already had been destroyed.

But Cal Fire also reported that McGlover had been arrested. He initially was charged with five counts of arson to wildland. According to the press release, the Cal Fire bulletin resulted in “the Hemet/San Jacinto Valley Gang Task Force locat[ing] and detain[ing] McGlover.” 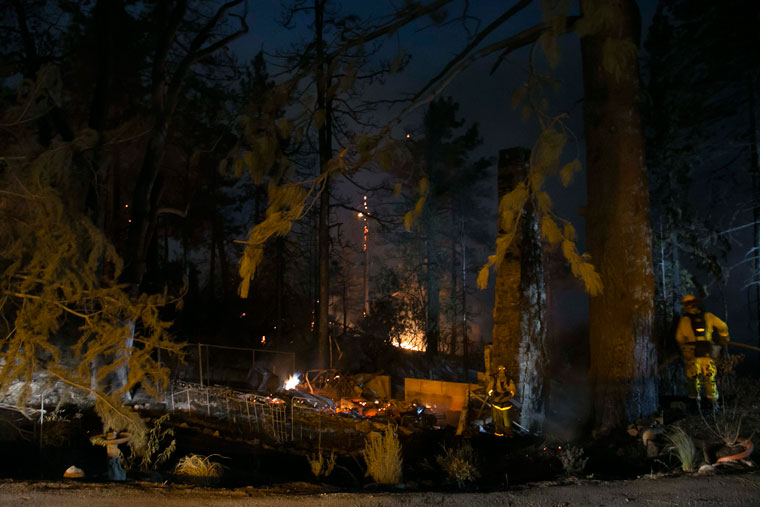 Once again, the day started with sun, blue skies and hot temperatures.

Southern California Edison officials were already responding to the outage, which was not only affecting 4,000 customers in Idyllwild, but another 5,200 Anza Electric Cooperative customers in the Garner Valley/Anza areas.

On day two of the fire, SCE said, “SCE will provide updated information once safe access to the area is granted, damage assessments are conducted and it is safe to conduct needed repairs. Customers in the area, much of which is under mandatory evacuations, are advised to expect service to the area to be out for a protracted period of time.”

Before noon, Gov. Jerry Brown had already declared a state of emergency and issued proclamations for the Cranston and Carr fires in Riverside and Shasta counties.

As afternoon arrived, the clear skies began to turn gray and then black, clouds loomed huge over the mountain and drifted north and east over the desert.

By evening, the fire was estimated to have grown to 7,500 acres and containment was 5 percent.

At the end of day two, there were 1,060 firefighters and support already on site. The California Incident Management Team Type 1 arrived in the morning and assumed command of the fire at 6 p.m.

Mandatory evacuations had now been expanded to include Mountain Center, Hurkey Creek, Fern Valley, Pine Cove and Cedar Glen, as well as Idyllwild. Garner Valley residents were warned that evacuations may become necessary there, too.

Thursday was the critical day for the Cranston Fire. Idyllwild Fire Chief Patrick Reitz said, “Idyllwild dodged a bullet. Incredible firefighting, aggressive air attack and the fuelbreaks made the difference.”

By day three, the IMT reported the Cranston Fire was now 11,500 acres and containment fell to 3 percent. The fire remained very active even overnight, according to the report.

Now Garner Valley residents were told to evacuate with a warning extended to Paradise Corners.

But the clear blue skies did not change that day. They remained clear and blue in the desert. Air attack kept dropping water and fire retardant on the Hill.

By mid-afternoon, word spread quickly via social media: Power had been restored. SCE said all Idyllwild customers, except about 200 in the Mountain Center area, had electricity. Anza Electric, however, was without power and using large generators to share power among its customers on a two-hour rotating schedule. 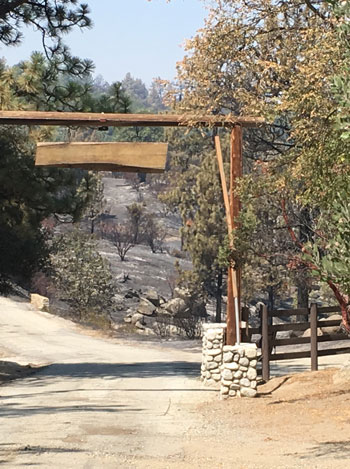 By late afternoon, the RC District Attorney’s Office reported that McGlover had been charged with 15 felony counts of arson and starting nine fires. He remains in custody and bail was set at $3.5 million. He is facing life imprisonment.

The evening incident update reported that the Cranston Fire continued to grow. Its size was estimated to be 12,300 acres. Friday was a good day and the weather helped. Now containment was 16 percent.

The update reported, “Fire behavior remained active today on the northeast and southeast portions of the fire. These areas experienced short, active runs with short range spotting. Good progress was made on the fire, but hot spots remain within the fire perimeter.”

Friday’s good news seemed tempered a bit on Saturday, but not diminished. Overnight, the Cranston Fire had grown to 13,118 acres and containment was 17 percent. Fire personnel were now near 1,750.

Friday and early Saturday, the growth was predominantly in the Garner Valley area and some along South Ridge above Idyllwild to the east.

“Concerns remain on the northeast portion of the fire along South Ridge with fire backing through retardant line above the town of Idyllwild. One of the focuses is this area today where aircraft and crews will continue to construct line,” the team reported.

But staff, at the IMT morning briefing, were all positive and optimistic about the day’s efforts. “Progress continued toward containment of the fire.”

South Ridge and Garner Valley still remained the primary areas with threats, but firefighters were gaining on the fire.

The weather continued to assist; winds were low and away from town and the fire. By evening, the Cranston Fire had not grown an acre and containment was now 29 percent.

By evening, the IMT reported that plans were underway to allow some residents to return to their homes. Then about 7:30 p.m., the evacuation of Garner Valley residents, who lived south of Morris Ranch Road, was lifted. But they had to return via Highway 371 through Anza to Highway 74, or from the desert on Highway 74.

Sunday morning brought mostly clear skies and some clouds, and more good news. The Cranston Fire would encompass only another 12 acres, for a total of 13,130, overnight. Containment was still 29 percent in the morning.

Optimism was still seen in the reports: “Substantial progress was made on the fire yesterday.”

While lifting evacuations was discussed at the team briefing, the Sheriff’s Department had not yet scheduled a time.

At 10 a.m., automatic calls and text messages were being sent announcing that Pine Cove, Cedar Glen, Fern Valley and a large portion of Idyllwild residents could return home. The route was still Highway 243 from Banning.

The rest of the day saw cars coming up the Hill and driving down 243 into Idyllwild.

Firefighter success was demonstrated with the reduction of staffing to about 1,550 personnel. Most were sent to other fires in California.

The IMT report noted, “Good work was done on the northeast portion of the fire where the biggest threat to the community persists. Crews were flown in to the wilderness to continue constructing containment line to keep the fire from reaching the town of Idyllwild.”

However, the county fire department reported that the fire had burned 11 residences, of which seven were destroyed, three affected and one sustatined minor damage. And still no major injuries — firefighter or civilian.

The team also announced a community meeting for Monday at 7 p.m.

The Cranston Fire is still burning, but its size is 13,139, only another 9 acres and containment at 57 percent.

The morning report stated, “Good work was done on the northeast portion of the fire where the biggest threat to the community persists. Containment line construction is nearing completion which will keep the fire from reaching the town of Idyllwild.” 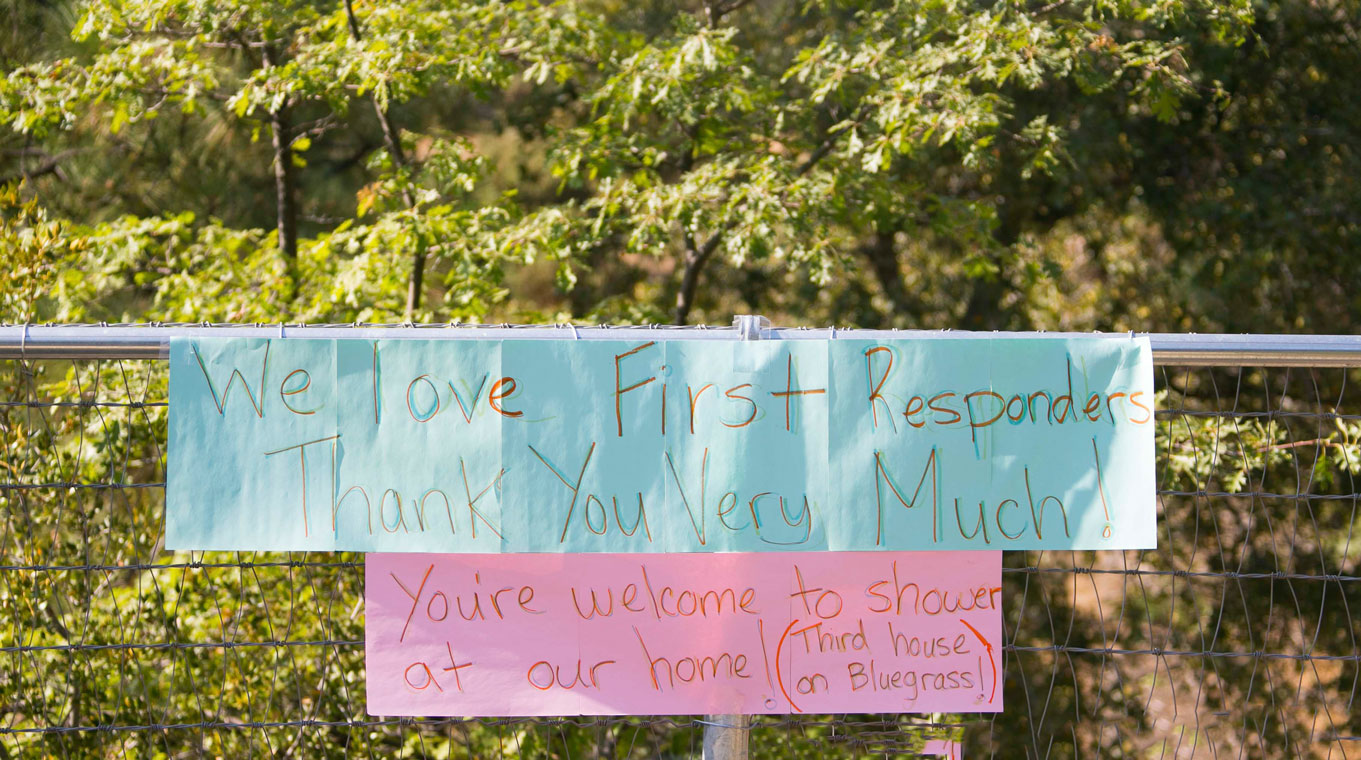 “It was a good night; pulled hose in Alpha and Bravo [areas of the fire],” said Operation Chief Chris Childers during the morning briefing. “It’s looking really good.”

Jerry McGowan, retired Forest Service fire official and the incident commander, told the crews, “It’s a good job, but you’re not done yet. But the hard part seems over.”

While the crews continue to fight the fire and mop-up hot spots, residents continue to return. Town is still far from normal, even as many businesses begin to reopen. 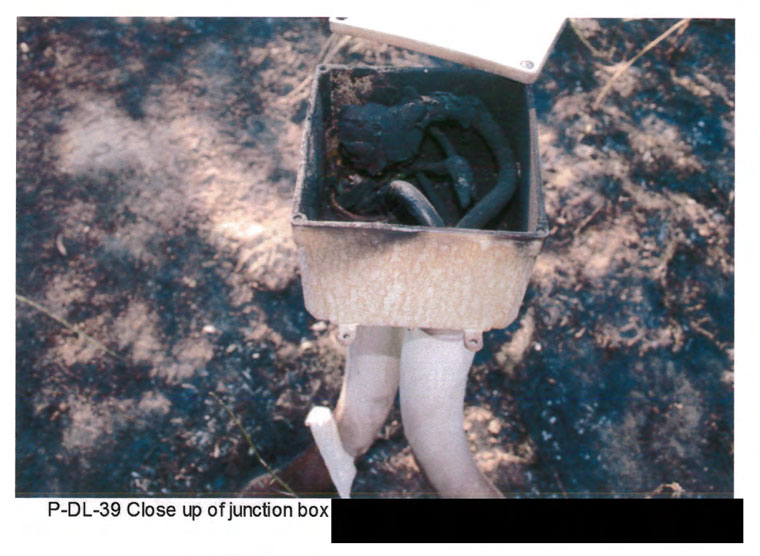 Feds sue regarding 2013 Mountain Fire: Suit filed with one day to spare